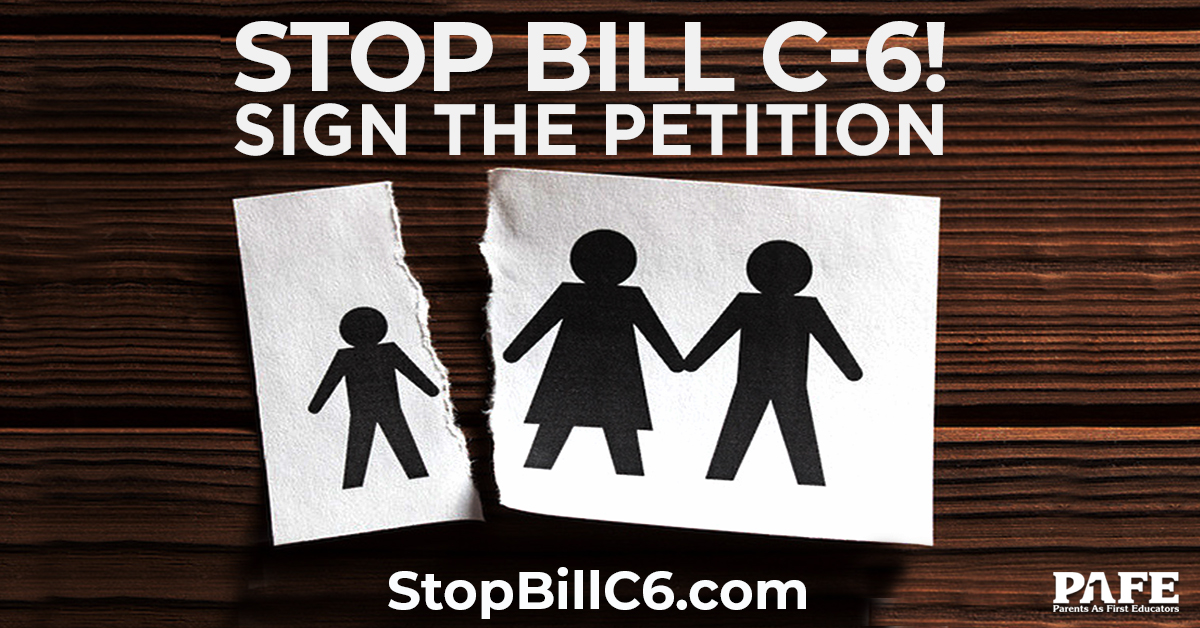 Bill C-6 will return for a third reading in Parliament any day now, and that means time is running short for us to do everything we can to stop it!

C-6 is the so-called “conversion therapy ban” bill, but it threatens parents, and anyone else, with jail time merely for trying to help a child during a time of confusion.

C-6 overrides parental rights by blocking access to any type of therapy that doesn’t ultimately affirm their child’s desire to become “transgender”, or their acting on a feeling of same-sex attraction.

CPC Leader Erin O’Toole assured us that C-6 could be “fixed” through revisions, but this plan proved tragically naïve. Remember, only 7 Conservative MPs voted against this bill at second reading.

Any revisions that would have protected the rights of parents, professional or religious counsellors were blocked by the Liberals and the NDP. They actually revised the bill the wrong way by adding “gender expression” to the definition of conversion therapy.

This is why PAFE has demanded -since day one- that we Stop Bill C-6!

This bill is frightening, and totalitarian at its foundation. Those who advance it have shown they will stop at nothing when it comes to the promotion of their radical gender ideology.

As written, this bill criminalizes and controls private conversations, even family conversations, under the misleading guise of a ban on conversion therapy.

C-6 is un-Canadian, and it must be stopped. You can help stop it right now by signing our petition, and urging everyone you know to do the same.

1) Call and write to your Member of Parliament today telling him/her to vote against Bill C-6 at third reading. To look up your MP's email or telephone number, click here. Let us know you have written to your MP at [email protected]

2) Copy and paste the letter below and email it to at least 5 of your family members and friends.

C-6 will be returning to Parliament for its third reading any day now, so it’s crucial that you contact everyone you know and get them to sign the petition!

We’re including a short message here that you can cut and paste right now to send to them. Just fill in the appropriate names:

Canadian Parliament will soon be providing a third reading for Bill C-6, the so-called “conversion therapy ban” bill. This is a bill that  Trudeau’s Liberals are pushing hard to pass.

C-6 represents a grotesque government overreach into the parental authority and the lives of the Canadian family. Under C-6, parents could be jailed for up to 5 years merely for helping their children in a time of confusion!

C-6 is unacceptable and it is un-Canadian!

We have to stop this attempt to legislate intrusion on our basic freedoms in the name of radical gender ideology. C-6 will prevent young Canadians from getting any kind of therapy which doesn’t ultimately lead to their becoming “transgender”, or acting on his or her same-sex attraction.

I’ve added my name to PAFE’s Stop Bill C-6 petition, and I hope you will, too!