Waterloo Teacher Cancelled for Questioning Children's Book at Board Meeting 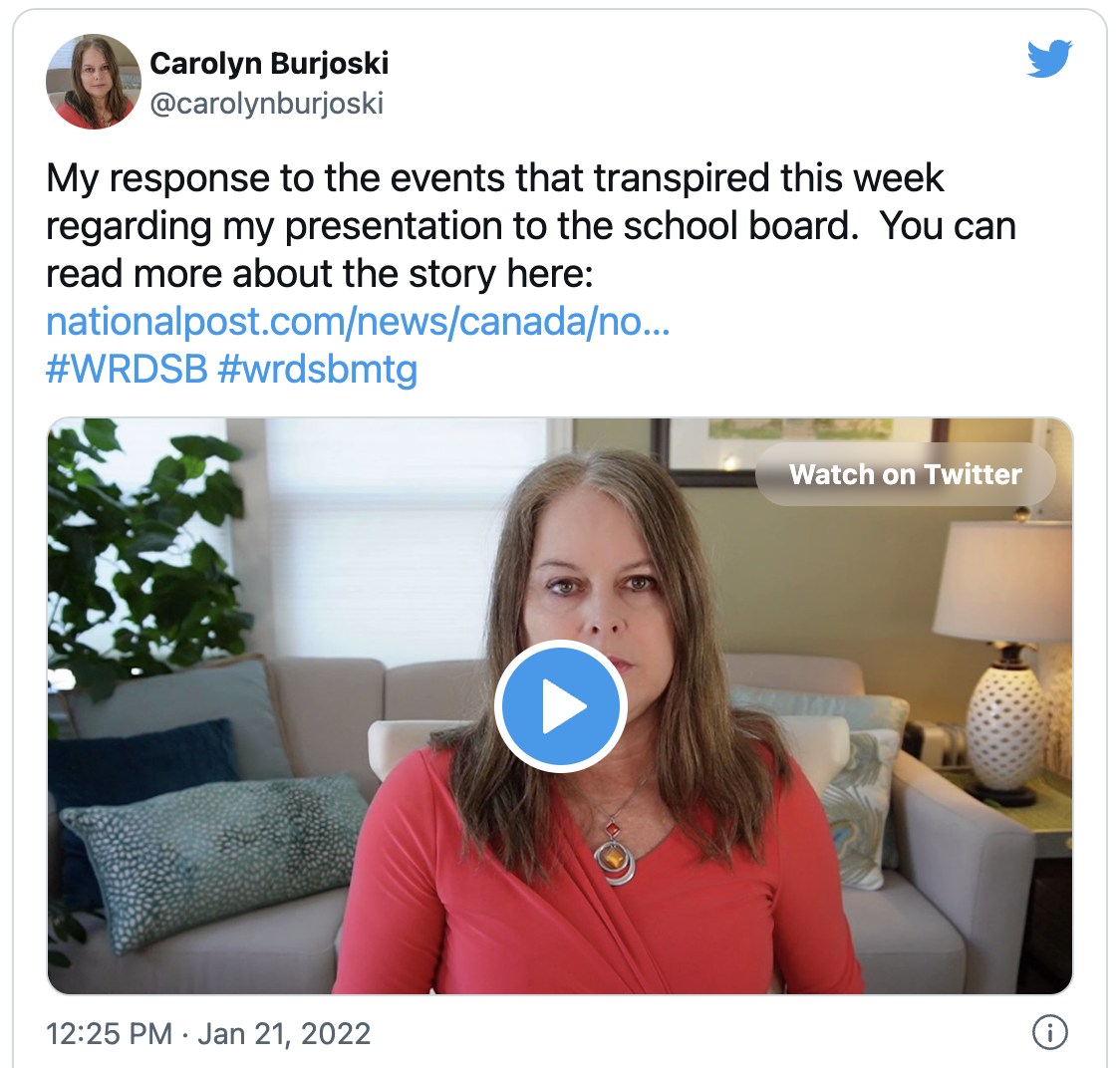 “While reading this book I was thinking ‘maybe Rick doesn’t have sexual feelings yet because he is a child”.

Carolyn Burjoski, presenting to the WRDSB Board.

A Waterloo Regional District School Board (WRDSB) teacher was cut off and cancelled midway through her presentation to trustees on Monday, January 17 for expressing concern about the highly sexualized content found in books available in elementary school libraries.

Carolyn Burjoski, who has been teaching English for 20 years, was cautioned and then stopped just four minutes into her presentation, after she’d raised concerns about the age appropriateness of two books that include sexual references to homosexuality and transgenderism.

Burjoski had cited a book called Rick by Alex Gino, in which a boy becomes confused and thinks he’s “asexual” because he doesn’t think about “naked girls” frequently, as his friend does.

Burjoski then referenced The Other Boy by M.G. Hennessey, in which a teen girl who wants to transition to become a boy is warned by her doctor that the hormone blockers and testosterone that are part of the treatment could make her infertile. The character glibly replies, “It’s cool.”

“The book makes very serious medical interventions seem like an easy cure for emotional distress,” Burjoski noted, along with the fact that the age inappropriateness of the material pressures children to grow up and think about sex too soon.

It was at this point thatScott Piatkowski, Board chair, halted Burjoski’s presentation for comments that allegedly violated the “Ontario Human Rights Code”.

Piatkowski said, “Ontario Human Rights Code includes gender identity as a grounds for discrimination and I’m concerned your comments violate that so I’m ending your presentation.”

A 15-minute debate followed as to whether the chair had acted correctly.

Trustee Mike Ramsey called Piatkowski’s invocation of the Ontario Human Rights Code a “stretch”,and said that the chair was “ill-informed on this issue”.

Ramsey also added, “The delegate (Burjoski) hasn’t made any personal attacks …she’s actually quoting from books that are in our schools.”

Piatkowski’s ruling passed by a vote of 5-4, and Burjoski was not allowed to continue.

Piatkowski later told CTV news that Burjoski’s comments were transphobic and “questioned the right to exist” of trans people.

The WRDSB has removed its recording of the meeting from the internet for alleged copyright infringement, although it is a regular, public session of elected officials.

You can view a video of the meeting here along with a letter to the WRDSB by Canadian Gender Report on why an open discussion of gender and sexuality-related materials available at school libraries is so urgently needed.

Burjoski was subsequently given what she terms a “stay-at-home order”, and warned not to communicate with any of her students or fellow staff. Her union representative has informed Burjoski that the board has appointed an outside investigator to examine her actions.

Burjoski is “flabbergasted” by what happened, and by Piatkowski’s remarks afterward.

“We do need to have a conversation about the intersection of biology and gender,” she observes. “We’re not having those conversations. The message is clear: no dissent is allowed.”

The January 17 WRDSB meeting was another excellent example of how the wokeness that has gripped our institutions makes it impossible for anyone to voice opinions that conflict with the accepted ideological narrative around gender and sexuality issues, or even to question that narrative.

Simply asking questions about the age appropriateness of material, as Carolyn Burjoski tried to do, is grounds for silencing, dismissal, and investigation.

If the WRDSB feels there is a reason to hide this kind of discussion from public scrutiny, then there really is something deeply wrong, and it must be corrected immediately.

As long as the onslaught of radical gender ideology continues to target the innocence of our children, it is our children who will continue to pay the price.

And it's not over yet!  According to the Agenda for tonight's board meeting, six delegations will address the board of trustees on the importance of queer representation in children's literature.

The deplorable actions of the WRDSB are a betrayal of their moral obligation to the children in their care.

Please address letters of support for Carolyn Burjoski
to:

Chair of the WRDSB Board of Trustees, Scott Piatkowski: [email protected]