In mid-November, 2018, the Ontario PC Party held its party convention, and PAFE urged hundreds of its supporters to attend so that we could pass pro-family policies, including repealing the sex-ed and gender identity theory. Doug Ford’s team was terrified and tried every trick in the book to thwart our efforts to propose and pass socially conservative and pro-parental rights policies. But PAFE stood strong against Doug Ford and his team.

At the convention, Jim was too busy campaigning for himself to bother speaking in favour of ANY of PAFE’s policy resolutions, resolutions against the Wynne sex ed, against gender identity theory, and for parental rights. Here is one such resolution that PAFE promoted and was successful in passing:

RESOLUTION: Be it resolved that an Ontario PC government will fully repeal the 2015 Kathleen Wynne sex-ed curriculum, including gender identity theory, and replace it, after consultation with all stakeholders, with an age-appropriate curriculum that respects parents, children, and the ethnic/religious diversity of Ontario.

Four of PAFE’s policy resolutions, including this one, passed, though, and this got the attention of the media. Ford panicked and condemned PAFE and Tanya’s effort.

With a headline blaring “Ford pledges to stop motion that calls for gender identity to be removed from the health curriculum,“ the Toronto Star reported at the time that Ford had this to say about the sex-ed resolution:

“’It came from the floor and it’s non-binding, so it’s done,’ Ford told reporters Monday.

Asked if he’s killing it, the premier replied: ‘It’s done.’

While it’s unclear what he can do given the matter was formally voted on and approved by members at the convention, a spokesperson for Ford said he ‘will explore every option as leader of the Ontario PC Party to prevent this resolution from moving forward.’”

And when Ford attacked Tanya and PAFE and our delegates for passing this resolution, where was Rick Nicholls, MPP? Nowhere. MPP Belinda Karahalios? Silent.  And candidate Jim Karahalios? He, too, had nothing to say about this.

Now, Jim Karahalios states falsely in his attack piece that PAFE “cut a deal” with Doug Ford before the convention. This is a LIE. There was no such deal, and you can see how upset Ford was that PAFE had “ruined” his inaugural convention.

There was also no “deal” with PAFE to support Ford’s “slate” or anyone else’s “slate” for the party executive. This snippet of a communique from Tanya, which Jim used in his recent mailing, shows that she endorsed three candidates running for the party executive, including Bola Otaraki, who was a part of Jim Karahalios’s “slate” and Tim Iqbal, who was  on Brian Patterson’s “slate”.  Both of them won. PAFE also endorsed Michelle Simard, who was on neither slate, but was explicitly running against someone on Patterson’s slate. She did quite well but did not win.

PAFE had no deal with Ford, nor with Karahalios. We endorsed exactly three candidates, as described above, in our email to supporters: 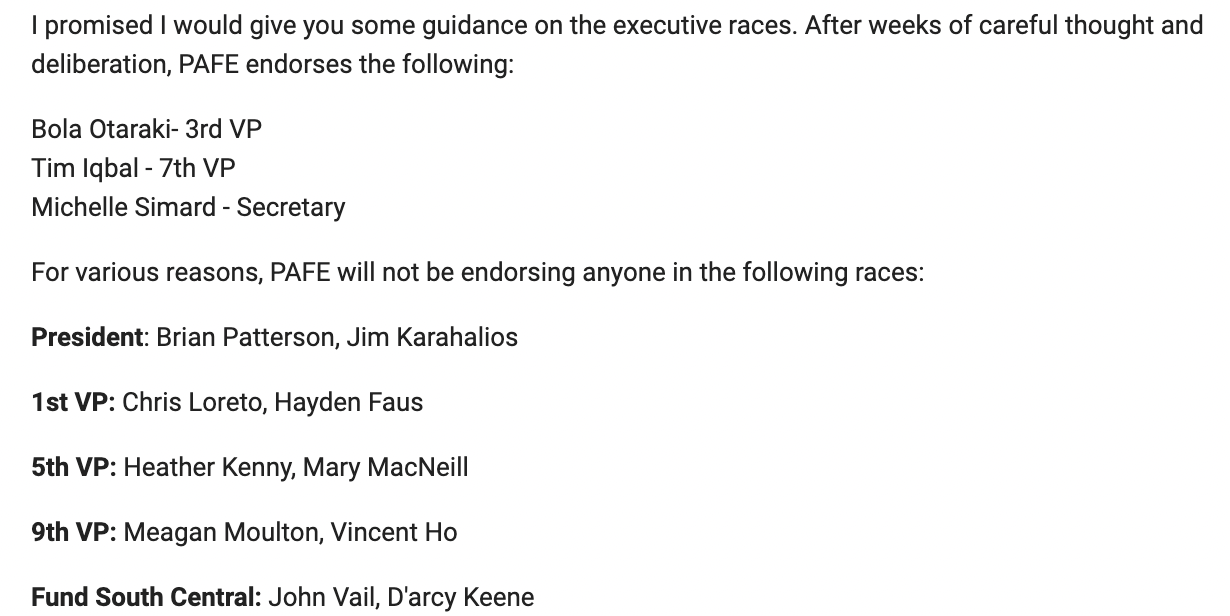 What about the vote on the Presidency? Karahalios’s opponent, Brian Patterson, had approached Tanya and PAFE for support and an endorsement, but he never got this. Indeed, Patterson had the endorsement of Red Tories such as Christine Elliott and Caroline Mulroney, but not PAFE. Jim Karahalios, for his part, never asked for PAFE’s support. Never – not once.  But thanks to PAFE's organizing hundreds of delegates at the convention, Jim benefitted from many of the PAFE votes, which wouldn’t have happened had PAFE not done its job and got them there.

Many times, our delegates asked us why we weren’t supporting Jim. Tanya usually told them “Well, he hasn’t even asked.”  Some of our delegates who were familiar with Jim’s betrayal of Tanya from earlier in the year did indeed share this information with delegates who asked. For her part, Tanya decided to “stay silent” on Jim’s betrayal of her, and on our part PAFE had this to say in the just-mentioned letter:

“I'm sure each of these candidates have some redeeming qualities, and some of them have even reached out to me for an endorsement. However, I don't have enough good reasons to say you should vote for one person over the other.”

Jim allegedly told a number of delegates that “he didn’t need Tanya’s endorsement” because “he already had enough PAFE delegates to win.” Now, Jim is complaining that Tanya did not endorse him.

After the results were announced and Patterson was declared the winner, Jim alleged that voter fraud had taken place and that he was the rightful winner. Alleging voter fraud is a serious matter, even more serious because it does, unfortunately, sometimes happen. Despite Jim’s public assertions that the vote was rigged against him, he never furnished any evidence to PAFE, nor did he ask for our help. If we had any evidence of voter fraud, we would have – then and now – spoken out against it. To this day, though, we have not seen it.

Despite thinking he had “enough” PAFE votes to win – and he certainly had most of them! – Jim Karahalios should have, under the circumstances, been glad that Tanya Granic Allen did not publicly speak out against Jim and her disappointment in his betrayal of her. Her “silence” on this question definitely worked in his favour. Why is he complaining about it now, especially since he has left the PC Party and started his own?