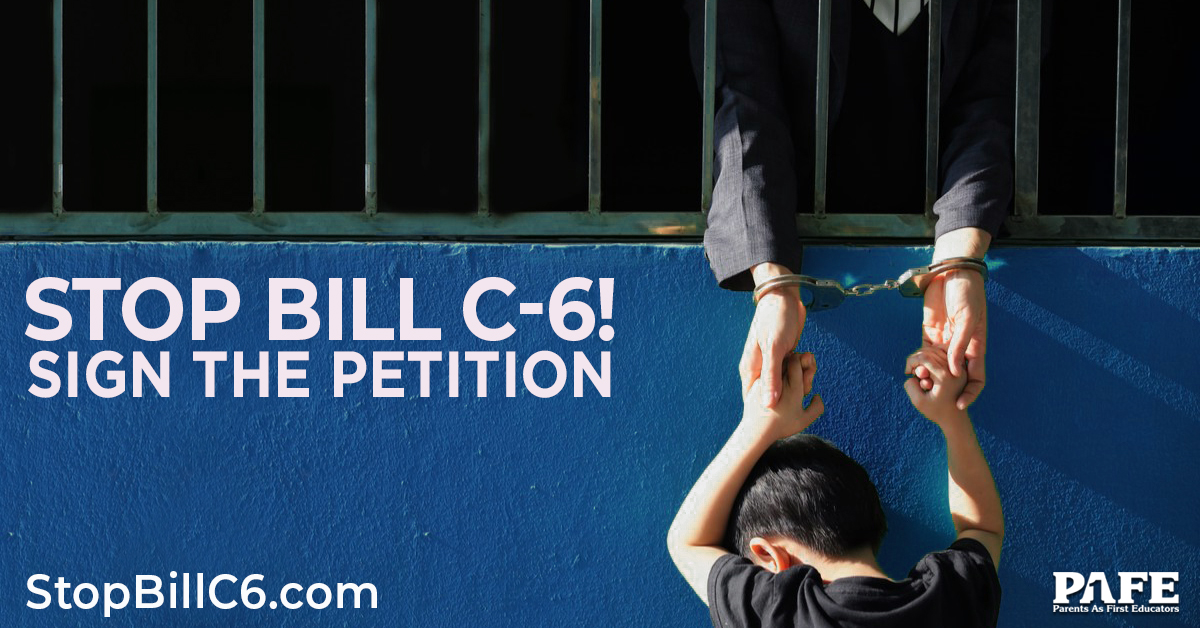 They’re getting back to business in Ottawa today, and that means it’s time to raise the alarm about Bill C-6!

C-6 is the so-called “conversion therapy ban” bill, which is really just another case of Trudeau Liberals’ radical overreach into the lives of parents, religions and professional counsellors.

Trudeau’s C-6 threatens parents, and anyone else, with jail merely for trying to help a child during a time of confusion.

That’s right! Under C-6, parents will be jailed for up to 5 years for acting out of love and concern for their children!

In fact, the aim of C-6 is to override the parental rights by blocking access to any type of therapy that doesn’t ultimately lead to their child becoming “transgender” or acting on his or her same-sex attraction.

This bill passed second reading with only 7 MPs voting against it, including Derek Sloan. PAFE has been lobbying hard for MPs to change their votes and vote against this bill, including mailing all MPs our brief that we submitted to the Justice committee.

You can help by signing our petition.  If you haven’t signed our petition against C-6, please do so immediately!

Here are some other actions you can take right now to defend the Canadian family:

Since Parliament returns today, it’s crucial that you contact everyone you know and get them to sign the petition!

Here is a short message you can cut and paste right now to send to them by email. Just sign with your name:

C-6 represents a grotesque government overreach into the parental authority and the lives of the Canadian family. Under C-6, parents could be jailed for up to 5 years merely for helping their children in a time of confusion!

We cannot stand for this unacceptable intrusion in the name of radical gender ideology, as C-6 will prevent young Canadians from getting any kind of therapy which doesn’t ultimately lead to their becoming “transgender”, or acting on his or her same-sex attraction.

I’ve added my name to PAFE’s Stop Bill C-6 petition, and I hope you will, too!