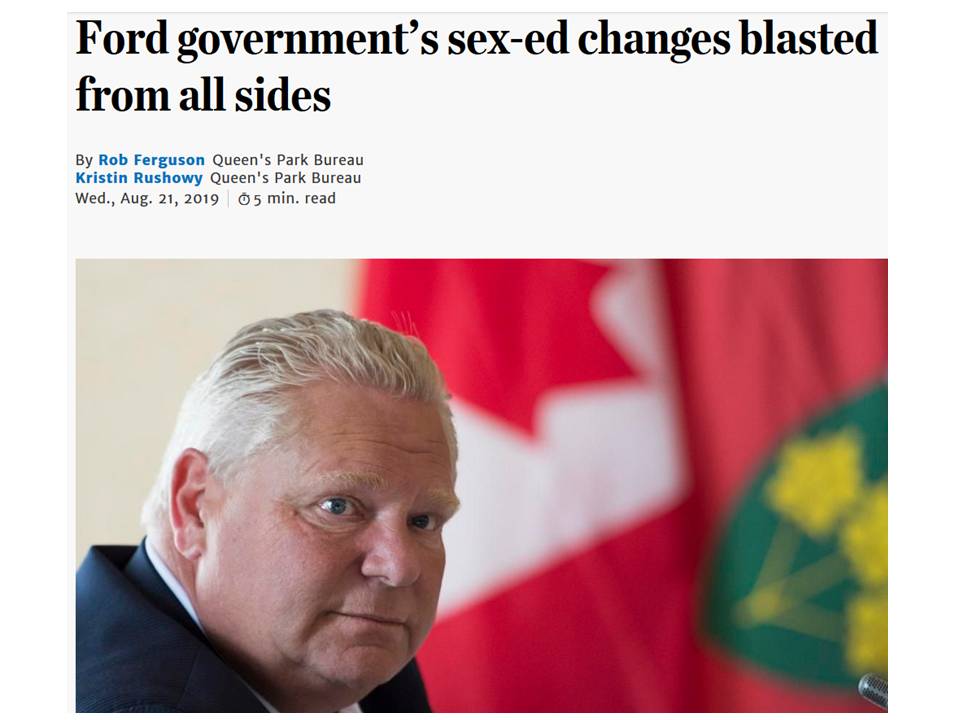 The Toronto Star headline nicely captures what has happened: "New sex-ed curriculum builds on previous Liberal version". This is exactly what Ford is doing: keeping and "building on" the Wynne sex-ed curriculum. To read the the Star story, click here.

The Globe and Mail story focuses on the so-called "opt-out" provision, which, however, will be completely ineffective (see my news release below). Read the Globe story by clicking here, and this is the quote they used from me:

Tanya Granic Allen, who ran for the provincial Progressive Conservative Party leadership against Mr. Ford and has been a vocal opponent of the 2015 sex-ed curriculum, said the government has failed in its promise to repeal the curriculum. Ms. Granic Allen said that, based on comments from the government in March, she knew gender identity and gender expression would be in the new curriculum.

“Ford promised to stop forcing gender-identity theory on the classrooms. Nothing has been repealed, gender identity can still be taught to children at any grade," she said on Tuesday.

For my initial comments, please read the media release below. I'll have more to say later!

Meet the new sex-ed. Same as the old sex-ed.

Earlier today, the Ford government officially released its revised version of the sex-ed curriculum. In reaffirming the government’s previous actions and communication on this topic, the new curriculum allows for the full teaching the Kathleen Wynne sex-ed, and any other curriculum components that a teacher elects to teach.

President of Parents as First Educators (PAFE), Tanya Granic Allen said, “Doug Ford promised to ‘repeal’ the Kathleen Wynne sex-ed curriculum, but this new curriculum is simply another version of the Wynne sex-ed. Doug Ford has broken his promise to Ontario parents. Promise made, promise broken.”

“The Ford sex-ed curriculum will harm children just like the Wynne sex-ed: by excessively sexualizing them at young ages, and by continuing to teach the unscientific gender identity theory with which many parents disagree.” As Granic Allen said today: “Exactly nothing of the Wynne sex-ed has been repealed. Doug Ford lied.”

The feature of the 2019 version of the Ford-Wynne sex-ed curriculum that will get the most media attention is the so-called “opt-out” for parents.

“Parents groups have long pushed for an effective ‘notification and opt-out’ provision when it comes to sex-ed,” Granic Allen said, “but this attempt by Ford and Stephen Lecce will be completely ineffective.”

According to arguments made by Ministry of Education lawyers in last winter’s court case brought against the government by a coalition of unions and others, there are absolutely no restrictions on what aspect of ‘sex-ed’ can be discussed or taught by any teacher, at any grade level. The only restriction is the grade at which a child is to be examined on a particular question.  For example, the controversial “gender identity theory” is scheduled for formal introduction and examination in grade 8, but it can be introduced and discussed as early as grade 1. The “notification” and “opt-out” provision can only apply to the formal and scheduled teaching of a topic and affords no protection for children at other grades.

“According to the government’s own lawyers, the government will do nothing to stop a teacher if s/he decides to teach the ideological ‘gender identity theory’ to six year olds” said Granic Allen, “and there is absolutely no ‘opt out’ or ‘notice’ if this happens.”

What the government should have done, Granic Allen suggests, is to keep its promise and actually repeal, or eliminate, inappropriate material such as gender identity theory altogether so it is not taught at any grade.

“In February 2018, Ford explicitly cited ‘gender identity theory’ as an example of the ‘liberal ideology’ that the Wynne curriculum was ‘forcing down the throats’ of Ontario parents and children,” said Granic Allen. “What has become of Doug Ford’s promise to stop teaching this unscientific theory? Another Doug Ford lie.”

February 13 2018- In a radio interview with Andrew Lawton, then leadership candidate Doug Ford decries gender identity theory as “liberal ideology” and uses it as an example of what is wrong with the Wynne sex-ed.

August-September 2018- Over 35,000 Ontarians signed a Legislative petition demanding that the Ford government keep to its promise of repealing he sex

September-December 2018- Ford government engages in what he called meaningful consultation with parents. Later Ford himself decried, that the consultation was “hijacked by special interest groups”. Parents were not directly targeted through schools.

January 10 2019- Government lawyers at the Ontario Superior Court of Justice argue Ontario teachers are free to use any curriculum and resources, and are free to teach any of the content from Wynne's curriculum, including the controversial gender identity theory.

March 2019- Lisa Thompson announces that the “new” sex ed is being developed, and she confirms all the topics of the Wynne sex will remain in the new curriculum