In his attacks, Karahalios suggests that PAFE (and Tanya) and Derek Sloan were somehow connected, through other people, in a conspiracy to “remove Jim from the race” for the CPC party presidency.

What conspiracy? He speaks of a “Sloan saboteur on Jim’s campaign” who seemingly gave Jim bad advice. As best we can tell from what Karahalios says in the flyer, he is suggesting that this bad advice from the “Sloan saboteur” led to a chain reaction of events that resulted in Karahalios’s removal as a candidate. PAFE had nothing to do with any “conspiracy” to have Karahalios removed as a candidate, and we are quite certain none of our friends or allies had anything to do with it either. We have no idea why Jim associated with this “saboteur” – if, indeed, there was a “saboteur” as Jim suggests – and why Jim chose to take bad advice, but that’s ultimately on Jim – not PAFE.

SHAME ON JIM KARAHALIOS for trying to blame his political misfortunates on PAFE. It is unfortunate that Karahalios was evicted from the CPC leadership race – it was at least a case of unfair “cancel culture”, at minimum – but he is wrong to assign any of the blame for his “cancellation” on PAFE, or to Tanya Granic Allen.

The CPC were sympathetic to this request (though I am not sure that this constitutes a conspiracy – maybe!). The CPC then broke its own rules in disqualifying Karahalios from the race. Karahalios rightly took the CPC to court over this, proved to the judge that the CPC were guilty of breaking their own rules, won the case, and was reinstated as a candidate. The CPC then promptly found a way to evict Karahalios again, but this time legally. Was this, on the part of the CPC, a case of cancel culture, pure and simple, or was there a conspiracy? We don’t know, and it seems that the judge couldn’t find an answer either.

As for PAFE’s involvement with any conspiracy or “saboteur”, we have no knowledge whatsoever of the inner workings of the Karahalios campaign. At no point did Karahalios or his campaign team ever reach out to PAFE for help. Certainly, many PAFE supporters were helping Jim, and encouraged PAFE to support Karahalios, but PAFE didn’t endorse any candidates for another several months. By the time PAFE released its Voters Guide/endorsement on July 30, 2020, Karahalios was no longer a candidate.

PAFE has never been allied with Erin O’Toole. Ever.

As for what transpired in the “post-Karahalios disqualification” phase of CPC history, Karahalios’s March 2022 attack brochure suggests that “Sloan, Allen, and PAFE spent the rest of the CPC leadership focussing their attacks on Leslyn Lewis to ensure she does not surpass O’Toole.”

This is a lie.

First of all, from PAFE’s perspective, we weren’t paying much attention to the CPC race until the summer and had almost nothing to say about any of this until late July. That is when PAFE  sent out an email “endorsement” of Derek Sloan and a VOTING GUIDE that we published online and sent through the mail to our supporters. Here is what we had to say in our single email on the topic that mentioned Leslyn:

And, in the paper letter that accompanied that Voting Guide, our advice was:

Regarding McKay, the VOTING GUIDE clearly indicated that he was an unacceptable candidate. 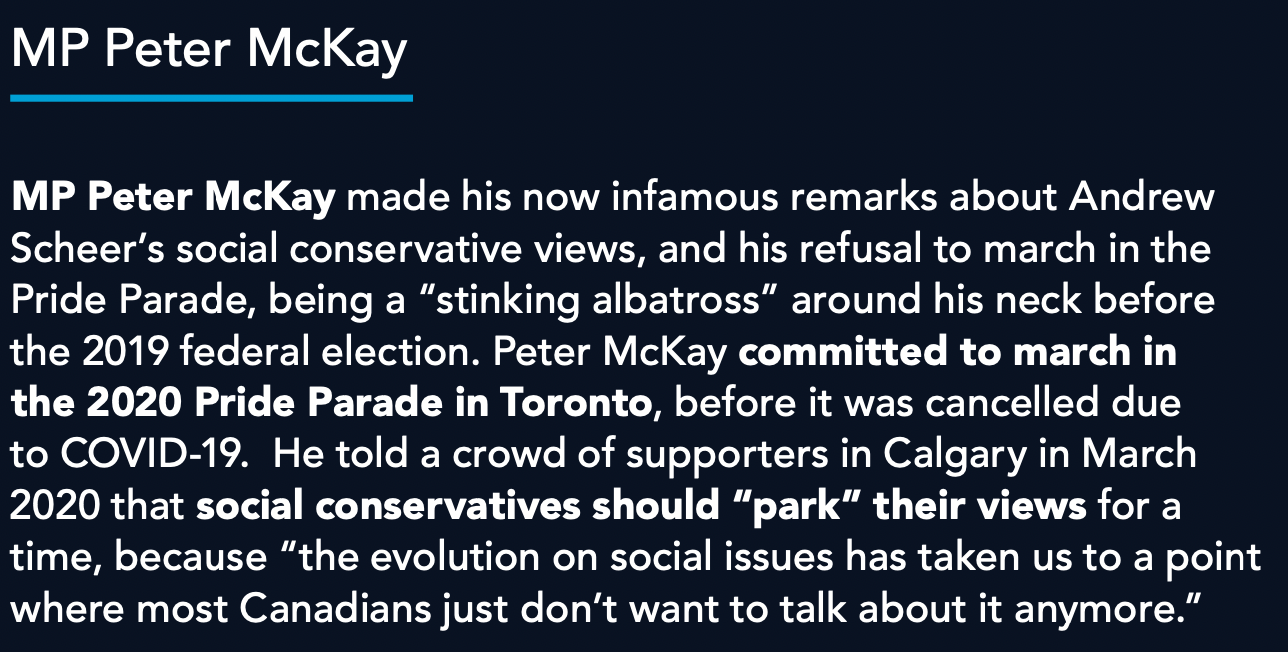 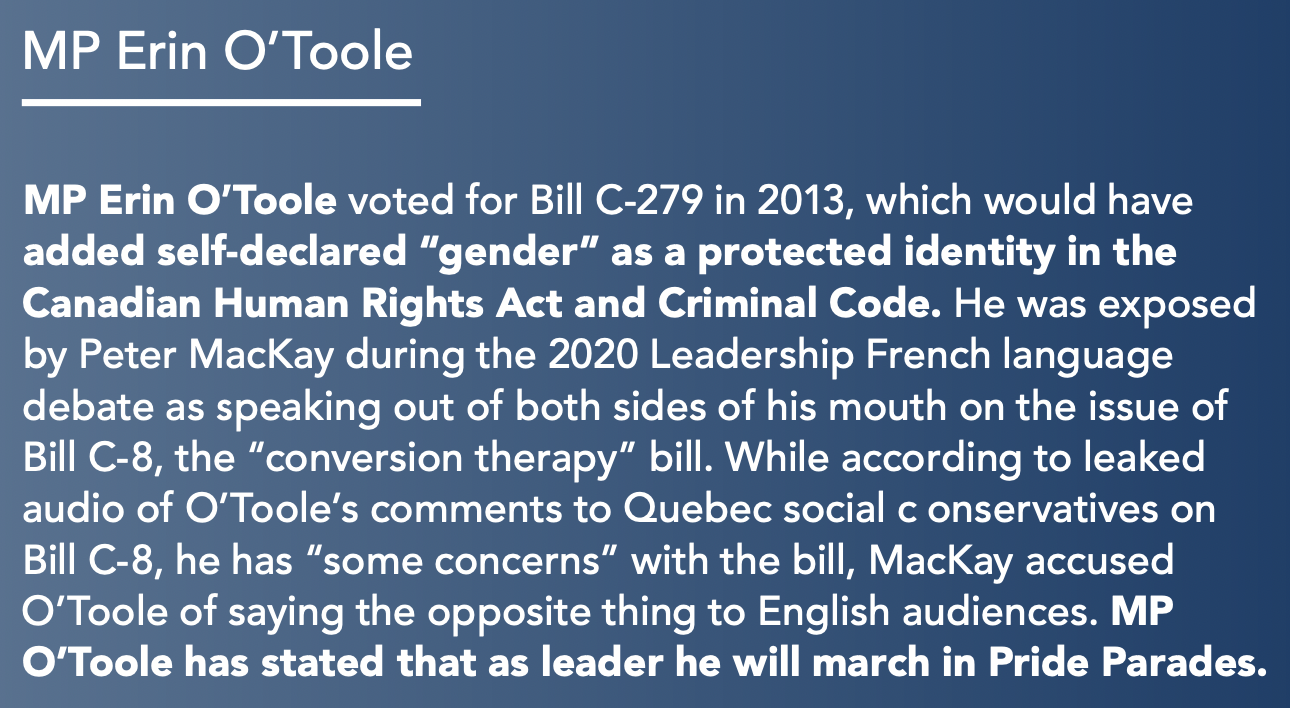 There is absolutely no way that any social conservative would read this and conclude that somehow PAFE was in league with O’Toole.

As for Leslyn, here is what the VOTING GUIDE said: 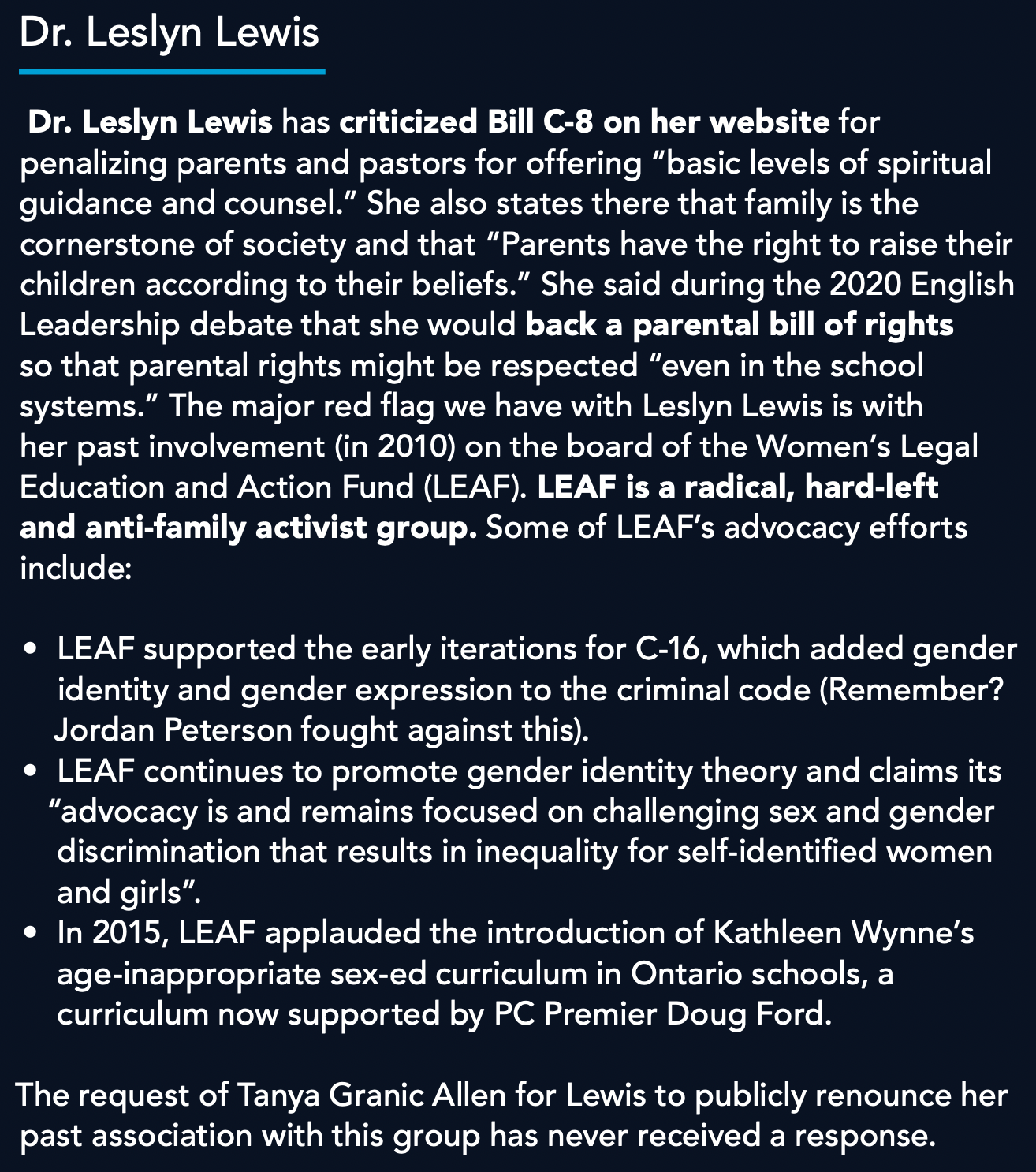 Note that the first third of this section provided information that PAFE supporters would have viewed favourably.  The remainder of the analysis involved an honest critique of a left-wing, anti-family group called LEAF, on whose board Leslyn Lewis had served for a time. Our summary sentence echoed Tanya’s concern that Leslyn never provided a satisfactory renunciation of Leslyn’s past association with LEAF.  Some of our supporters thanked us for this important information, while others disagreed with the importance we attached to Leslyn’s association with that group. Regardless, this VOTING GUIDE represents, along with the email that promoted it and the mail-out effort to send the same information, the entire PAFE campaign to educate our supporters on the candidates.  Bottom line: Vote for Sloan #1. Do not vote for O’Toole or McKay. As for Leslyn Lewis, there were good points in her favour, and PAFE ultimately suggested that it might be possible to mark Leslyn as a #2 vote, but we honestly reported the concern that we had.

Jim Karahalios’s absurd misrepresentation of this matter is obviously designed to suggest that PAFE was somehow in league with O’Toole, which is a total lie, and that we somehow ran some sort of nasty effort against Leslyn Lewis. We did no such thing.  We did, in exactly one VOTING GUIDE, provide an honest assessment. And like Tanya, we gave Leslyn Lewis every opportunity to contact us and to explain the situation with LEAF.  Like Jim Karahalios, however, Leslyn Lewis never contacted PAFE and never asked for our help. All things considered, our coverage of Lewis was fair, and we even suggested to Sloan supporters that they could consider Leslyn Lewis as their second choice.

Karahalios’s representations to the contrary are abominable lies.

PAFE and the CPC’s March 2021 Convention

Karahalios adds one more bizarre slur against PAFE, and this concerns the March 2021 CPC Convention.

In December of 2020, the CPC National Council set March 18-20, 2021, as the dates for the CPC National Convention, an event that is required every two years. Because of the various “lockdowns” in effect at that time, the CPC made this convention an “online” affair.

PAFE decided to encourage its supporters to seek election as delegates to the convention, and, if elected, to participate in that convention by voting for pro-family policies, pro-democracy constitutional amendments, and for certain candidates for the CPC’s “National Council”.

PAFE had great success in the delegate recruitment process, helping to encourage and elect hundreds of pro-family delegates to the convention. The purpose, was, minimally, to prevent O’Toole and his Red Tory cabal from passing socially liberal, Red Tory policies and constitutional amendments as part of a Red Tory power grab.  We were successful in this minimal goal.

How very strange then that Karahalios, in another example of his own “tactics of deception”, now chooses to dismiss PAFE’s efforts this way: “Sloan, Allen, & PAFE help O’Toole’s CPC generate convention revenues while staying silent on COVID-19 mandates Sept 2020-Mar 2021”. We will let Sloan speak for himself on COVID-19 mandates, though we know he was outspoken on these, then and now. The same is true for Tanya Granic Allen.

So, in two of these three instances, Karahalios is, once again, telling a bald-faced lie. He is willfully deceiving the readers of his brochure. PAFE was indeed not focussed on the COVID-19 issue but, as per usual, on parental rights, and the parental rights issue of the time was the anti-family so-called “Conversion Therapy Ban” bill, C-6 (later C-4).

Karahalios then says that we did “help O’Toole’s CPC generate convention revenue”, he is implying for the reader that, once again, we were in league with O’Toole to raise money for the O’Toole-led CPC. This is another Karahalios sleazy lie. PAFE of course was a part of no deliberate effort to raise money for the CPC, anymore than Karahalios was trying to raise money for the CPC when he urged his supporters to pay $15 to the CPC to join and vote for him for CPC leader. The CPC was rather unhappy that we were participating in the CPC convention and rather wished we had not been involved, and there were various news stories about social conservatives trying to “hijack” the CPC convention. Throughout, PAFE’s goal was to encourage as many pro-family activists as possible to become delegates to the CPC, and for the purpose of promoting a pro-family agenda.

The clearest example to illustrate just how determined we were to stand against Erin O’Toole and his Red Tory elite can be found in a brief retelling of our efforts to elect pro-family candidates as Ontario’s representatives to the CPC National Council. In the end, two of the three candidates that PAFE supported were elected: Peter Aarssen and Kara Johnson.  The third candidate, former CPC Mississauga-Streetsville candidate Ghada Melek, did not get elected, but her story is worth telling here, briefly. For more detail on this contest, click here.

In a nutshell, Ghada Melek, a parental rights advocate and pro-freedom conservative activist from Mississauga, Ontario, declared that she was running for the CPC National Council. Ghada had previously been a victim of cancel culture by then-Ontario PC Leader Patrick Brown and his Campaign Co-Chair Walied Soliman and others. Soliman and other Brown activists later moved on to Erin O’Toole’s leadership campaign and played a key role in the CPC under O’Toole. It should have been no surprise, then, when the CPC party officials refused to allow Ghada Melek to become a candidate for the National Council. She was a known social conservative and pro-democracy advocate, and there was every reason for Team O’Toole to want to block her.

Ghada Melek sued Erin O’Toole’s CPC – and won! Ghada Melek, on behalf of the grassroots of the CPC, took an enormous risk in suing O’Toole’s CPC, but helped the cause of establishing legal precedents that political parties needed to follow their own rules, building on some aspects of Karahalios’s own legal case against the CPC in 2020. For the rest of Ghada’s story, click here.

To sum up, then, PAFE helped Ghada Melek stand up to Erin O’Toole’s team and helped her lawsuit against O’Toole’s team.  PAFE was the only group to endorse Ghada’s candidacy. Where was Jim Karahalios in all of this? SILENT.

And as for the hundreds of delegates that PAFE encouraged to become delegates, yes there was a registration fee for CPC’s ostensible “break-even” convention. We have no idea if the CPC “broke even”, lost, or made money, but that is beside the point. Of course we wish there weren’t any registration fees to pay: more of our supporters would be able to participate.

We make no apologies for asking our supporters to voluntarily buy party memberships or pay conventions fees if they can afford it. It is the price of democratic participation in this country, and our supporters make many sacrifices to be involved.

Jim Karahalios is simply telling another sleazy lie in implying that PAFE’s motive for involvement with the CPC convention was in any way to HELP Erin O’Toole. Instead, we thwarted O’Toole’s plans for a Red Tory takeover of the convention and helped successfully SUE his unethical team when they acted improperly in disqualifying Ghada Melek, a conservative activist and parental rights hero. Shame on Jim Karahalios for his shameless innuendo and lies.