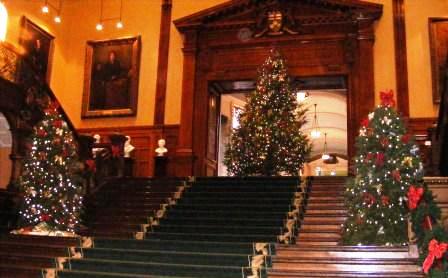 ‘Twas the night before Christmas when all through Queen’s Park,
Not an MPP was stirring, their offices were all dark.

Their nameplates were hung on their doors with such care,
In hopes that in a year, they would still all be there.

Not to forget what took place just a short while ago,
Patrick Brown was knifed, “Me-Tooed”, and then forced to go.

Queenie Yu had predicted this day would soon come,
when Patrick Brown and his corrupt team would be finally undone.

Kathleen Wynne and the Liberals snickered and sneered,
“Another victory at the polls!”, they prematurely cheered.

A sudden PC Leadership? Oh my! This was impossible to most,
But it had to be done now that Patrick Brown was toast.

A field of candidates quickly started to emerge,
Rod Phillips was first in but then Caroline’s surge.

“Sorry Rod”, someone said, “your chances are done”,
“Ya gotta drop out - time to drop, cut and run!”

But remaining candidates can’t be comfortable and smug,
Because out of the blue came Rob’s brother Doug!

And then from the fog – where has she been?
Came the return of the perennial Tory: Christine!

A job from the Liberals is something she got,
But running for Leader is better – and so … Elliott!

When out in the public arose such a clatter,
“I’m In!” declared Tanya, “There are issues which matter!”

The gasps! The shock! From the chattering classes,
She won’t raise the money, or garner support from the masses!

“I’ll do my best, please support me”, she appealed to the throng,
Debate after debate, and on tour she proved them all wrong,

Tanya captivated the media, and in the debates she led.
In response, Elliott and Ford bettered their stance on sex-ed.

Doug Ford was declared the victor at the end of the race.
The media called Tanya “Kingmaker”, which was in fact the case.

Tanya ran for the PC nomination at the behest of Doug,
She won in Mississauga Centre and then he pulled the plug.

Betrayal? Backstab? Whatever the term.
“Doug must repeal the sex-ed” – Tanya was firm.

The election was won, with sex-ed as a central point,
Lisa Thompson, new Minister of Education, Ford did appoint.

“…they need to learn about gender identity”, she said on her first day,
Which upset parents who didn’t want this bit of the Wynne sex-ed to stay.

Queenie and Tanya rolled up their sleeves and started to embark
On getting signatures for a paper petition to be read aloud at Queen’s Park.

In a few short weeks 35 thousand names were collected,
Yet no MPPs read it aloud, so the Hansard reflected.

Finally, Randy Hillier stood for democracy and read part of it aloud.
But it was Toby Barrett who fully read and signed it, making us proud.

Repeal Bill 89! Protect parents! And perhaps the most contentious one yet,
Was repealing gender identity theory from schools, which the PC Party did vet!

Then Doug told the media: “I’m not moving forward with that. So, it’s done.”
So much for listening to the grassroots and following the Party’s Constitution!

PAFE promoted the sex-ed consultations which ended in December.
But would Ford “listen” to parents as he “listens” to each PC Party member?

Oh my! How unimpressive was participation in the consultation process.
Instead of sending surveys home to kids’ parents, they created a mess.

Teachers’ unions flooded the website and skewed results on day one.
Can Ford use any of these statistics or practically none?

It is such a big job to hold these politicians to account.
It costs money and resources, with all these campaigns to mount.

Donate to PAFE, click here, and give a shilling,
Get a tax credit with Stop the New Sex-Ed Agenda – how thrilling!

Help us keep up the fight for the parents, for the children, and for you!
And ensure Ford keeps his promises, repeals the sex-ed and fixes Bill 89, too!

Please give generously so Tanya and Queenie can represent you right,
"HAPPY CHRISTMAS TO ALL, AND TO ALL A GOOD-NIGHT!"

Your donation to Parents As First Educators (PAFE)helps us fight for parental rights!
Please make a donation today by clicking here.