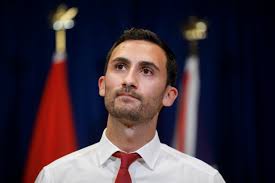 Doug Ford’s government has charged ALL school boards in Ontario to add “gender identity” to their Codes of Conduct, which impacts student discipline and hiring of teachers.

Gender identity theory goes against common sense and the Catholic Church’s teaching that there are only two sexes: male and female. However, on October 31, Minister of Education Stephen Lecce stated that the Toronto Catholic District School Board must adopt gender identity terms into its Code of Conduct.

How did all of this come about?

It started with the Anti-Bullying Act in 2012 under then-Premier Dalton McGuinty and part of the Ontario Human Rights Code the same year. Premier Kathleen Wynne subsequently pressured school boards across Ontario to adopt gender identity terms in order to render them consistent with the Provincial Code of Conduct.

In August 2019, after suspending Ontario’s sex-ed curriculum for a year in response to parental complaints about gender theory and age-inappropriate material, the Ford government capitulated to having the old curriculum taught in its entirely.

Likely emboldened by Ford’s sex-ed flip flop, the Ontario Human Rights Commission sent the Toronto Catholic board a letter admonishing it to add the terms on Sept. 17, 2019.

On October 31, Minister Stephen Lecce said: "My message to the board is quite clear. My expectation is that every child irrespective of their differences can see themselves reflected in schools and more importantly that they will adhere to the Ontario Human Rights Code."

To read this background information in more detail, click here.

PAFE will continue fighting for the right of parents – not the government – to be the first educators of their children. Please support our work with a donation by clicking here.