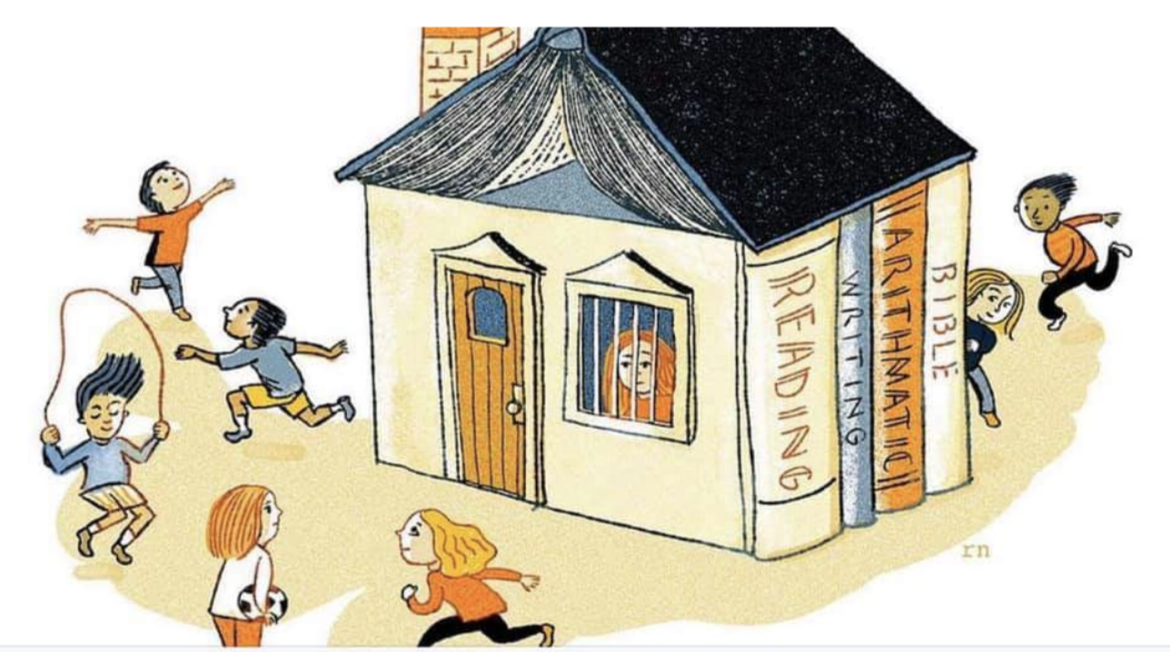 The cover image for the Harvard Magazine article shows a homeshooled child imprisoned with her "arithmatic" [sic] books and the Bible.

The COVID lockdown has been tough on many families. Aside from lost jobs, health concerns, and general anxiety, many parents suddenly find themselves running “school” at home.  And what about the many parents who have been homeschooling for years? The government-enforced social isolation has been really challenging for them, as well as everyone else.

In light of this, I was flabbergasted to see a Harvard professor, Elizabeth Bartholet, launch a tirade against homeschoolers in an interview in the latest issue of Harvard Magazine.

Referencing an article she published in the Arizona Law Review and titled “Homeschooling: Parent Rights Absolutism vs. Child Rights to Education & Protection,” Bartholet explains her motive is to call for “a radical transformation in the homeschooling regime and a related rethinking of child rights.”  She advocates “a presumptive ban on homeschooling, with the burden on parents to demonstrate justification for permission to homeschool.”

A ban on homeschooling?

According to Bartholet, the threats to the homeschooled child are two-fold.  On the one hand, abusers seek the cloak of homeschooling to hide their crimes and on the other, conservative, usually Christian, parents deprive children of the values, such as tolerance, that make them good citizens of the world.

Bartholet presents no evidence of her allegations of high incidence of abuse among home-schooled children, and ignores the high rates of abuse – perhaps 1 in 10 children – experienced by children at the hands of public-school educators.

PAFE concurs with the authors of this op-ed in the Christian Post: “Let me be clear: Every single case of abuse is horrific, and anyone anywhere who perpetuates such abuse should be stopped and prosecuted. What’s unclear is why, for Bartholet and Harvard Magazine, the outliers in one arena disqualify it, but not in the other.”

It's unclear until you consider the second proposition, that parents choose homeschooling because, according to her Arizona Law Review paper “they want to isolate their children from ideas and values central to our democracy, determined to keep their children from exposure to views that might enable autonomous choice about their future lives.”

Well, there you have it.  As Bartholet told Harvard Magazine, homeschooled children are a “threat to U.S. democracy.”

This is nonsense, and pure anti-Christian bigotry.

Please support PAFE with a donation by clicking here.

As Naomi Shaefer Riley writes, “her notion that being a public school graduate makes one better able to participate in American democracy is undercut not only by how badly many of our public schools educate students but also by studies suggesting kids at Catholic schools for instance have greater knowledge of civics and levels of civic participation upon graduation.”

Bartholet’s estimate that up to 90% of homeschooling families are Christian was challenged by homeschooling expert, Kerry McDonald who suggests the proportion is actually about two-thirds.

Even if you’re not a home-schooler, you should sit up and take notice of this next part.

Bartholet muses to Harvard Magazine that it’s “important that children grow up exposed to community values, social values, democratic values, ideas about non-discrimination and tolerance of other people’s viewpoints,” noting that European countries such as Germany have a complete ban on homeschooling.

“The issue is, do we think that parents should have 24/7, essentially authoritarian control over their children from ages zero to 18?” Bartholet asks. “I think that’s dangerous. I think it’s always dangerous to put powerful people in charge of the powerless, and to give the powerful ones total authority.”

As Rod Dreher notes, what Bartholet is really saying is that it’s wrong to have any place to hide from progressive liberal ideology.

“Recently, some public schools have adopted policies for handling transgendered students that require teachers and staffers to deceive parents of gender dysphoric children. This is really happening. The school places itself between parents and their children, for the sake of assisting children’s beliefs that they are the opposite sex. It’s terrifying. In a matter of utmost concern and intimacy, parents really cannot trust the schools. And that, in my view, is at bottom the reason this Harvard Law professor and other elites hate homeschooling: they really do believe that they know better than families, churches, and non-state institutions, what is best for children. This is about an ideology of domination masquerading as care for abused children, and for liberal democratic values.”

Princeton scholar Robert P George is pleading for everyone to wake up and notice this threat to parental nights.  He wrote on Twitter “The way this usually works is that secular progressives are in the red zone before conservatives and religious folk have noticed there’s a game going on and gotten onto the field. For once, just once, could we notice? A serious attack on parents’ rights and authority is underway.”

Take notice, and, let’s not let them win!