In the lead-up to Ontario’s 2018 provincial election, the issue of sex education was a hot-button issue, with Progressive Conservative Leader Doug Ford pledging to repeal the controversial curriculum brought in by the Liberal government of Kathleen Wynne.

Four years later, as the province heads toward another election in June, groups that were concerned about the age-appropriateness of the curriculum say the PC government reneged on its promise.

“We, as parental rights activists, would refer to it as the same curriculum [as Wynne’s],” Jack Fonseca, a spokesperson for Campaign Life Coalition, said in an interview. “The sexuality portion of it, the radical sex-ed portion, is the exact same curriculum they just reinstated.”

Teresa Pierre, president of Parents as First Educators (PAFE), one of the groups active against the sex-ed curriculum, says parents remain as concerned today as during Wynne’s term about the contents in the curriculum, noting however that there hasn’t been as much protest due to the COVID-19 pandemic.

John Robson, a history professor at Augustine College and an Epoch Times contributor, says how things have transpired with Ontario’s sex-ed saga is an indication of “how hard it is to challenge the educational establishment.”

“Parents have very limited leverage over the system, and the politicians are more or less in agreement with the establishment that it’s not really the job of parents to educate kids,” he said in an interview.

The issue of modernizing sex education in Canada’s most populous province has been controversial since 2010, when the Liberal government of Dalton McGuinty introduced a new curriculum to update the 1998 one, only to withdraw it due to parental backlash. But the curriculum was reintroduced again by Wynne’s government in 2015, and this time it stayed—despite an outcry by parents from various communities, with some even pulling their children from school. 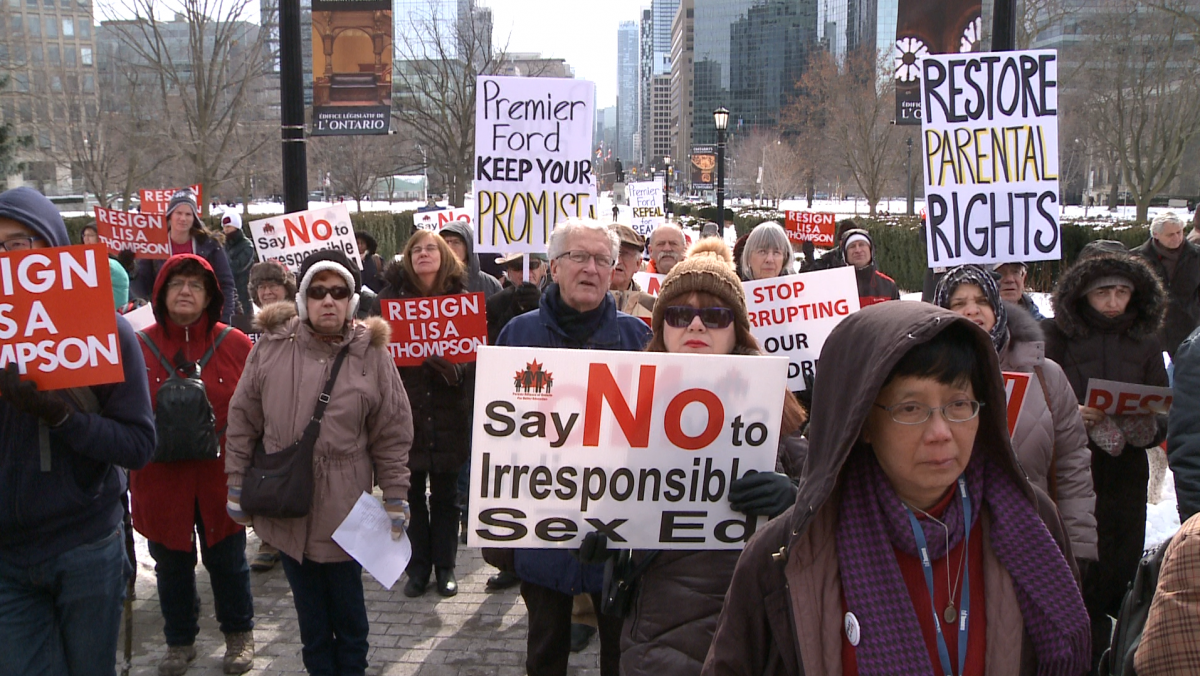 People gather to call on Premier Doug Ford to keep his promise to repeal the controversial 2015 sex-education curriculum at Queen’s Park in Toronto on Feb. 2, 2019. (NTD)

During the 2018 election campaign, Ford said the Liberals had turned schools into “social laboratories,” saying they “have introduced the sex curriculum based on ideology—a curriculum that teaches sensitive topics starting at an early age.”

Shortly after winning the election, in the fall of 2018 the PC government brought in an interim curriculum that removed some of the contentious topics but still kept concepts such as gender identity. The interim curriculum was criticized by teachers’ unions as well as the opposition NDP and Liberals for rolling back the concepts previously included, and different groups took the government to court over the issue. It was also criticized by opponents of the 2015 curriculum for still including some of the more controversial material.

The government launched online public consultations to gather input on a new curriculum. Media reports in late 2018 based on information obtained through freedom of information requests said the majority of the feedback opposed changing the 2015 curriculum. Ford said the process had been skewed by “certain groups” who flooded the online system at the beginning of the consultations.

The government eventually brought in a new, permanent curriculum in 2019. It covers topics such as online safety, family, and healthy relationships, as well as mental health and concussion. But except for a few changes, the sex-ed content remains more or less the same as the 2015 curriculum.

The new curriculum bumps sexual orientation from Grade 5 to Grade 6, and teaches gender identity and gender expression in Grade 8 rather than in Grade 6. Also new is an opt-out policy, which allows parents to pull their children from classes covering the sex-ed program.

Fonseca says the PC government didn’t want to fight the “powerful teachers’ unions and the media,” opting instead to cave in.

“They said, ‘let’s just give them what they want and reinstate it.’ And that’s exactly what they did,” he said.

Tanya Granic Allen, a vocal critic of the sex-ed curriculum and mother of five who was a candidate in the 2018 PC leadership race, says the way the government handled the file was “a lot of smoke and mirrors.”

“They said they were going to repeal it, but they were saying one thing and doing another,” she said in an interview. “[Ford] actually flip-flopped on it.”

Grace Lee, a spokesperson for Ontario Minister of Education Stephen Lecce, says Ford “listened to the voices of parents by fulfilling his 2018 pledge to repeal, consult, and replace” the Liberal government’s curriculum.

“Parents know their children best, which is why in the revised curriculum, our government introduced an important opt-out option for parents, to ensure that parents’ rights and choices are respected,” Lee said in an email.

“Ensuring age-appropriate content along with new content that was not even mentioned in the previous curriculum, such as online safety, consent, concussion prevention, and human trafficking, underscore our commitment to keep students safe in and outside of the classroom.”

Going Against the System

For parents not in agreement with the curriculum, Robson says there are many challenges and obstacles to getting the results they seek. 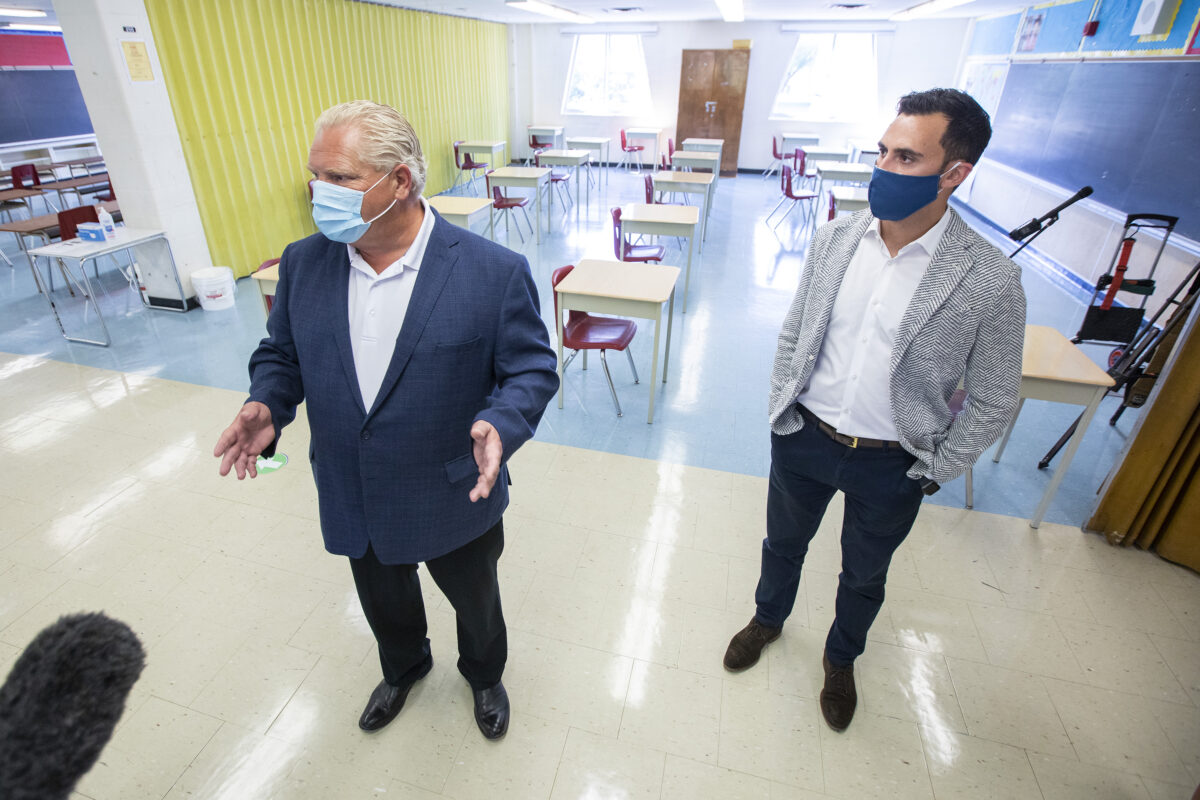 “The system is just set up in such a way that it grinds them down. And if you decided that ‘I’m going to fight this curriculum,’ you’d look at the last seven years and say, ‘It’s hopeless, I just can’t do it,’” he said.

“If you think about this as a parent activist, this all started with a new curriculum in 2015. By the time the Ford administration had brought in its new curriculum in 2019, well if your kid was in Grade 5 when it started, your kid is now in Grade 9. They basically outwaited you. And that’s what they do: They know that parent activists come and go because their kids grow up. But the bureaucrats and the teachers and the administrators are there forever.”

Robson says that in places like Florida, parents have a lot more “leverage” as there’s a “much more vigorous private school system” and “a political party that’s actually on their side.”

“[In Florida], it’s intellectually reputable to challenge the sexually radical establishment. But here, in some sense, you have to blame the populace. If we let them do it to us, it’s really on us in the end.”

Florida recently passed a new law that prohibits instruction on sexual orientation from kindergarten through third grade, as well as instruction that isn’t age-appropriate.

David Leis, vice-president of the think tank Frontier Centre for Public Policy, says politicians tend to stay on the sidelines unless there is a strong movement of concerned parents and citizens.

“Politicians tend to go where the winds are, and where they feel safe, in terms of any public position,” Leis said in an interview. “And Canadians, let’s face it, as a culture tend to be quite respectful people, and verge on silence instead of exercising their voice.”

He cites critical race theory (CRT) as an example of another concept being promoted in school systems by ideologues that parents may not be very aware of. Proponents of CRT say the concept is necessary in the fight against racism, while critics say it’s based on Marxist ideas, interpreting society through a lens of a power struggle between white and non-white people, and promoting actions against the former.

Leis says there’s much more awareness among parents in the United States about CRT in schools. Last year, Glenn Youngkin, a Republican running for governor of Virginia on an anti-CRT platform, defeated the Democratic contender Terry McAuliffe, who had said parents shouldn’t tell schools what to teach their children.

“Virginia is a very good case study, and that is that in Canada, we have emerging groups, but we don’t have a strong coalition of parents and educators that are organized to oppose this,” Leis says. “When that happens, that will change the political dynamic quickly.”

The Ontario legislature is currently deliberating a private member’s bill introduced by an NDP MPP that is centred around the ideas of CRT. Bill 67, dubbed the Racial Equity in the Education System Act, is currently being studied in committee. The Ford government says it hasn’t whipped government MPPs on how to vote on the bill.

Students cross the street on their way to school in Mississauga, Ont., April 1, 2021. (The Canadian Press/Nathan Denette)

Bill 67 defines “anti-racism” as “the policy of opposing racism including anti-Indigenous racism, anti-Black racism, anti-Asian racism, antisemitism and Islamophobia,” without naming whites, and requires every school board to establish a “racial equity plan” for all its schools.

Leis says despite its name, the bill is actually “reverse racism.”

“It’s about engendering division and hatred for others simply because of their race, ironically,” he says. “We need more than ever a school curriculum that engages people to succeed in our world, and this type of curriculum takes enormous energy and time away from that objective, and will hurt children.”

David Livingstone, a liberal and political studies professor at Vancouver Island University, says that although Bill 67 would make CRT more formalized in the Ontario school system, his impression is that the concept is already prevalent in school systems across Canada.

“Some of the CRT material is coming in through the back door, through the professional development sessions [for teachers],” he told The Epoch Times.

Livingstone says that compared to Americans, Canadians have more trust in their state institutions, so they tend to be less skeptical and less likely to question what is being taught in schools.

“They have accepted, for better or for worse, that what the teachers and what the schools are saying is probably the right thing to do. They have sort of surrendered, I think, too much of that decision-making to the schools,” he says.

But he says if more parents were to find out what CRT—which he says is an American export to Canada—is all about, they’d be “miffed about it.”

With many issues in Canadian school systems, including lowered education scores compared to peer countries, public schools should be focusing on delivering quality education, rather than “politicizing young kids,” Livingstone adds.

Pierre says many parents are pulling their children from public schools because they’re worried about the concepts being taught.

She says her organization, PAFE, remains active in resisting issues such as the new sex-ed curriculum and CRT in schools, and in getting involved and raising awareness, especially around election time, such as the upcoming school trustee vote in Ontario in the fall.

“There’s always the ability to change our systems, like our education policies, and our leaders as well. So there’s always the possibility that we can succeed in getting this really removed once and for all,” she says.